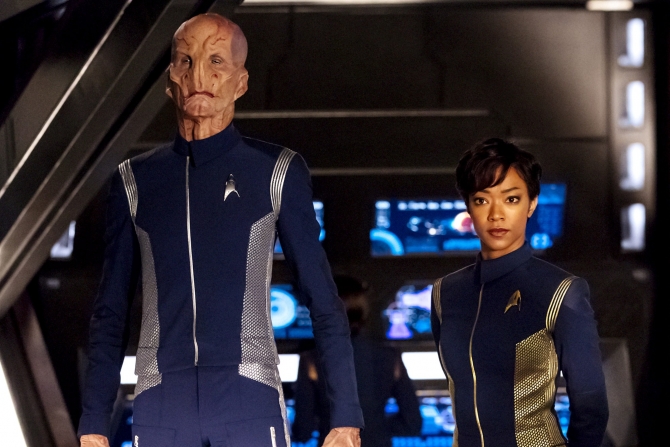 “Star Trek: Discovery” Should Have Been Better Than This

When I first sat down to write about Star Trek: Discovery, I had some very clear thoughts about why I wasn’t happy with it. Then I posted them on Facebook, then I copied them here.

After I had done that, I was given a teachable moment, and learned from a writer and director exactly why I was on the wrong track with most of it.

First, What I Thought Was Wrong

Here are my thoughts on Star Trek: Discovery, and why I’m disappointed in it.

After a 12 year drought, we finally have new Star Trek to watch. It should be the return of the prodigal son, but it isn’t. Here’s just a few of the things wrong with the show from my perspective, having nothing to do with CBS’ abusive treatment of the makers of Star Trek fan films, or the bizarre decision to put Star Trek behind a paywall for U.S. audiences.

If you haven’t seen Star Trek: Discovery and plan to, STOP READING HERE, because there are SPOILERS after this. You have been warned. Anything bad that happens to you after having read this warning is therefore your own fault.

People have been asking me what I think of Star Trek: Discovery, and I have to tell them that it’s just not wonderful.

And then I tell them, I’m sorry, but while somehow despite all its faults it’s watchable, and that this is an achievement, all the problems mean it’s not great Star Trek, or even great story telling.

And then they get incredulous, or defensive (even aggressive in some cases), and demand that I explain myself.

How many was that? Two dozen issues? And I didn’t even get into the ridiculous “reimagining” of the Klingons that loaded the actors with so many silicone appliances and different sets of goofy teeth that for the most part it was all they could do to huff out their lines through the unresponsive makeup. They had their occasional moments, but for the most part they simply didn’t work.  Nor did I address the series ending, where all 23 houses of Klingons suddenly decided to act responsibly instead of the leader of at least one house succumbing to Klingon battle rage (something Klingons have always been known for).

And to be frank, that’s not even a comprehensive list of all the script problems, and you’ll notice that I didn’t even touch the jarring discontinuity of Starfleet technology as a significant flaw that affected every single other creative decision they made after throwing that out. It’s not just a fan being butt hurt about the show being inconsistent with established canon. Canon is useful for a reason: if you stick to your continuity, your show fits well with the rest of the established universe and can be taken seriously as an addition to the universe. If you don’t, then what you do looks like a tacky attempt to pump money out of a franchise.

Of course it was restricting. Of course it’s difficult. There’s a cure for that, though. It’s called “writing”.

When red herrings and “deus ex machina” are regular plot devices, and when the writing just falls apart from day one, and when the art direction runs amok, it detracts from one’s ability to actually watch and enjoy the show.

Is anybody actually in charge? Which of the show’s eight or nine executive producers actually producing? I’m guessing not very many, and the ones that are are either overtaxed or not paying attention.

This is why I’m not as enthused as I wish I could be about the new Star Trek. That there would be so much wrong with the show after only six episodes is staggering. It’s also insulting, because it demonstrates very clearly that CBS thinks we’re all just too stupid to notice any of this.

Each episode appears to have had a great deal of spit and polish applied to it, with a great many people applying their very best efforts to make it look as good as they possibly can. The attention to the quality of the acting and the visual design was obviously there, even if we don’t all necessarily agree on what that should have looked like. Unfortunately there doesn’t seem to be anybody watching to make sure it all meshes together properly, and in many cases it simply doesn’t.

This should be a triumphant return. Instead it’s a deeply flawed exercise in dumbed down “pew-pew” sci-fi, and while I’m sure it’ll be okay for people who don’t care that much about whether a story has internal consistency or not, if I tried to send a sci-fi book manuscript to a publisher with these kinds of problems I’d get it kicked back for a massive rewrite in a heartbeat.

This, ladies and gentlemen, is pulp sci-fi. Star Trek should have been above this.

What They Got Right

Now, in its defense, you can see where the story arcs have been set up, and why, and how the characters are meant to progress from their various falls from grace, their struggles for redemption, and the mirror arcs of characters who are supposed to be in control gradually losing that control. That part of it is working, but I think there’s more to this problem than just acknowledging basic dramatic constructs like Checkov’s gun, that if you show the audience the gun in act 1, that this gun should be used by act 3.

The character of Michael Burnham is complex, and a little alien because of her upbringing. That’s part of why she’s been unapproachable as a character, why people aren’t warming up to her. Hello, she’s been raised as a Vulcan. Of course she’s going to have a severe case of broomstick-in-uncomfortable-places.

As much as we might not like the technology as portrayed in the series, from the standpoint of having to sell this to the general public it makes sense not to make things look like the 1960’s view of the future. The fact that this makes it not mesh well with Discovery being a direct prequel to Star Trek: The Original Series is just something they have to work around. There’s no smooth fix, but in CBS’ defense, frankly, sooner or later you have to give the whole universe a face lift. You can’t stay in the 1960’s forever.

The characters took 10 episodes to make sense in some cases, but eventually they got them where they needed to be from a dramatic standpoint, and from a storytelling standpoint.  A friend of mine called this a “long build”, and that you have to have patience with the process, and more of it will make sense as we go. The simple visceral requirements of the story are met, yes. They could yield some satisfying story arcs out of all this.

In the End, It Falls Far Short of the Mark

But this – this is not only presented as Star Trek, but as science fiction as well, and with science fiction at least, there is an additional overlay of requirement: the story must be internally consistent. In this way it is like a mystery novel. Everything in the story has to feed back into the story and clearly connect with other parts of the story with a decisive *click*. These moments are few and far between in Star Trek: Discovery.

It’s certainly not the worst Star Trek we’ve seen. We don’t, for example, have a story about how a tweaky variant of warp drive turns the captain and the first officer into giant lizards who then have sex and create a new species, like we did in Star Trek: Voyager.

However, this is damning with faint praise. No, to fix Star Trek: Discovery, they’d have to get some people who understand science fiction into the writing pool. It’s obvious, to me at least, that they don’t have them yet.

Whether you enjoy this iteration of Star Trek depends on how much you care about internal consistency and story arc. The acting is pretty good. The stories they tell are a jumbled, jangly mess. Each episode contains some sort of internal contradiction so bad that it takes you out of the moment, ruining the episode and the experience if your brain is engaged at all. And, the first season ends in a jawdropping Whiskey Tango Foxtrot event that makes zero sense given the setup and the history they’ve established for the Klingons.

The first two episodes really have very little to do with the story arc, and were really just back story which should have been used as subtext for the remainder of the season instead of being uselessly produced at a cost of about five million dollars.

Two episodes in the middle have to do with a hilariously misinterpreted Harry Mudd, and suddenly drop the series from being story arc driven to episodic, only to have that course reversed again when they’re over.

A sign that something can be cut from a story or script is whether you’ll notice something missing if you were to cut it. If you cut out these two episodes, and pretend they never existed, nothing happens. Five million more dollars completely wasted. As far as the story they claimed to be trying to tell goes, they could have just filmed the cast shooting soda water down each other’s trousers for 84 minutes. It would have been a lot cheaper, and it would have had the same contribution to the story line.

So they shot fifteen episodes and didn’t have the sense to realize four of them could have been cut without hurting a damn thing, and it ballooned their budget by ten million. 1Every episode out of the remaining 11 had at least one “wait, but THEY JUST SAID…” moment in it, and the whole first season leads up to a belly flop of an ending.

Yes, it’s possible to watch, and even enjoy, Star Trek: Discovery. But leave your brains in the bucket by the door. You can pick them up again on your way out.