This page is for other miscellaneous projects that don’t fit in any other category.

These images represent the only pictures I still have of the full-sized working replica I built of Yoda of the Star Wars trilogies. The sculpture is of the head, sculpted in Roma Plastilina #4 (the hard stuff). It was sculpted over a plaster casting of the skull mold, so that the final latex skin would fit perfectly over the finished fiberglass skull.

So yeah, this was all sculpted in high sulfur clay, the stuff you don’t dare try to pull a silicone mold from. This was back in ’84, we have much better sculpting clays now than we did then.

The molds were made of dental stone; the head, hands and feet were cast in foam latex. I sculpted the feet separately because identical wrinkle patterns would have been spotted right away. The skin of the head was stretched over a fiberglass skull and rigged with working eyes, eyelids and brow. In the hands, the fingers were articulated. The facial features could all be operated by a lever box.

Yoda took three puppeteers to operate him, and made his big debut at the Egyptian Theater in Hollywood on opening day of “Return of the Jedi”. The two other puppeteers were Jeff Farley and Mike Moore, both of whom worked as my apprentices during his construction, and both of whom went on to exemplary professional careers doing practical effects and prop construction for motion pictures and television. They helped me operate him for the TV cameras and passers-by as we walked Hollywood Boulevard.

Had I had my wits about me, we would have had a sheaf of resume’s under my arm. It was highly unfortunate that we hadn’t, because representatives of Lucasfilm and ILM were there, and at first they thought I’d somehow managed to finagle him out of their vault at Skywalker Ranch. D’oh! I’ve been kicking myself over that one ever since.

It’s kind of ironic that these are the only two pictures I have of Yoda, considering that all three TV networks and all the local news stations shot 30 or so seconds of footage of him at the premiere. Yoda was on every channel, on every newscast that day. I understand that Mike Moore managed to get footage of that, and that I may be getting some of it soon. If that happens, I’ll post the footage for download here.

I was quite proud of the detail I put into it; I was careful to the point of counting wrinkles and dimples. It’s all precisely correct, except for the mole you see on his left eyebrow. It’s supposed to be on his right. I had been working from a flopped image and hadn’t known it until after I’d already made the molds.

Yoda currently sits in a big plastic bag in my office closet. His rubber skin has since decayed to the point that it’s dangerous to move him at all, let alone take him out to show anyone. I may someday recast his skin in self-skinning urethane, but that’s a ways off, and I’ll probably have to consult with Jeff Farley of Obscure Artifacts to figure out the best way to go about this. It’s been a lot of years, but Jeff, being one of the cofabricators and puppeteers, and having gone on to a rather illustrious career in makeup design and effects, would definitely be the go-to guy for this.

Seeing videos of the Stuart Freeborn build, I now know that the ears were cast separately, but on mine they were all one piece with the head. You could walk right up to him and examine the puppet, and not see the seam because there wasn’t one to see.

And yes, I do still have all the molds for this build, 35 years later, and yes, I plan a rebuild. 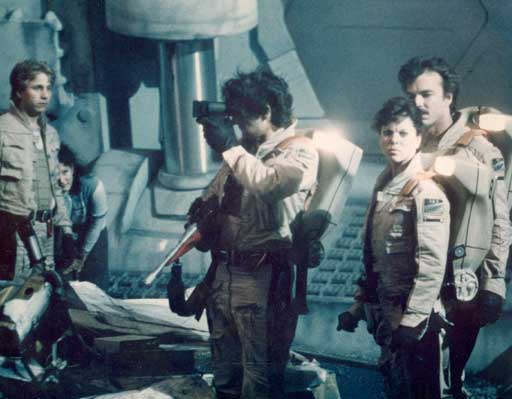 The cast of Roger Corman’s “Galaxy of Terrors”, (also called “Planet of Horrors”, among other things) wearing fiberglass explorer’s backpacks made by myself and Tony Tremblay at New World Pictures in 1981.

That’s Erin Moran in the foreground. Behind her is Edward Albert, and the guy in the foreground is Zalmon King, who got a juicy role primarily because he provided some of the funding for the film, as I recollect. Whoever the blond lad in the back on the right is, forgive me, I don’t know who you are. The girl bent down in the back behind them all is the girl who was in charge of continuity.

The backpacks didn’t actually open (except to put the twin six volt lantern batteries in), but one had a retractable sensor device, cobbled together by Tony Tremblay.

They each had headlamps, powered by 6 volt lantern batteries (it’s very hard to find these anymore, but back then they were common). The wiring was a little wonky because it was done so fast, and at one point one of them caught fire on the set and caused quite a panic.

I sort of had to invent the designs on the fly, and didn’t have the benefit of input from the art director; likewise, it was my first time using a lathe. I didn’t have a lot on my mind besides getting it done, so I borrowed liberally from other movies and TV shows I had seen.

Up, Up and Away

For a while I made my living as an assistant cameraman on FX and timelapse shoots. Shown here is a still I took while working on a timelapse shoot of the Los Angeles City skyline. This photograph was taken at dusk, using 5247 film in my old beater Leicaflex, with an exposure of about 4 seconds. It was taken from the rooftop of a hotel near the San Gabriel mountains, looking westward at the downtown skyline. 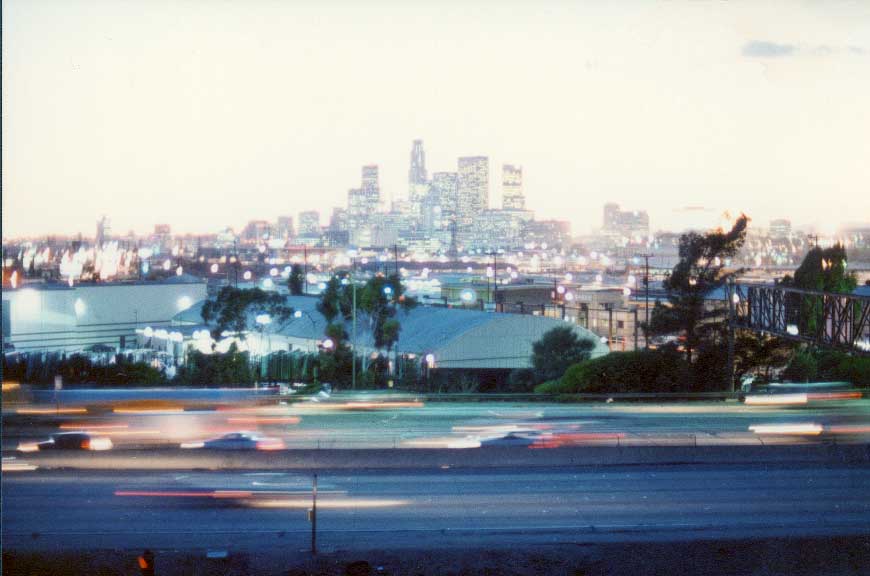 I worked on many such shoots over the course of about six months time, including one where I was loading magazines for a 35mm pin-registered Mitchel in my lap while riding in a helicopter flying about 1500 feet over the same buildings you see here. 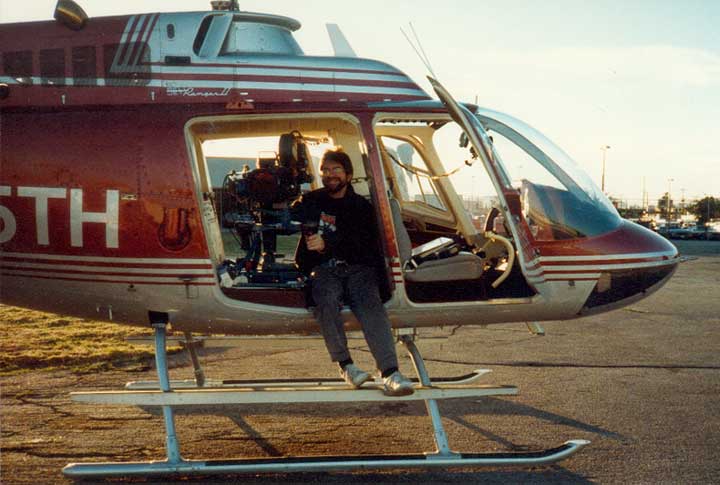 It was very exciting work, and I never quite got over the feeling of working with the clouds between my knees, so to speak. I’d love to go do it again if the opportunity ever came up 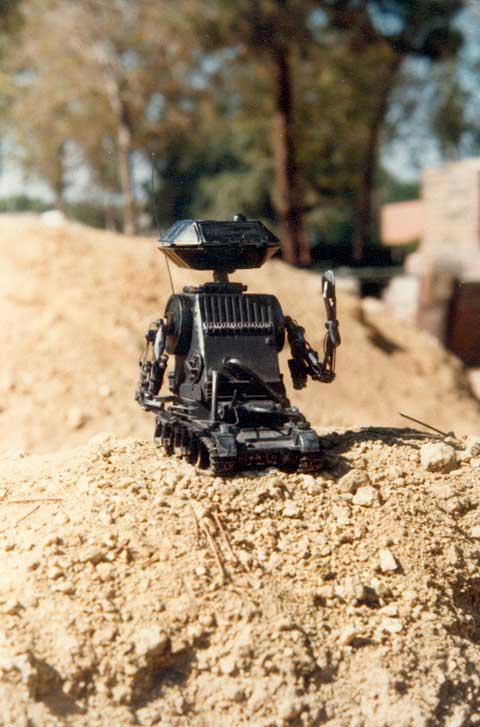 This little guy was an exercise in greebling. He’s made up of the same kind of visual texture details used to make the ship models in the earlier Star Wars films, and the arms are literally just bits of plastic, with the wires make of model part sprue – the stuff that the parts in your model kits come mounted on – stretched over an open candle flame to produce the filaments.

Though it’s hard to get a sense of scale from this photograph, look at what he’s holding in his uplifted hand: it’s a dime.