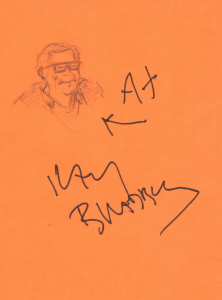 Ray Bradbury, From the Heart

Ray Bradbury, one of the world’s most notable secular humanists and one of the greatest writers of all time, came to speak at the Simi Valley Senior Center last Sunday, and I took my wife and son to see him.  It was a fundraiser for the city library – Mr. Bradbury’s a huge supporter of civic libraries.  It was a small gathering, but I figured I probably wouldn’t get very many more chances to meet him.  He’s rather elderly now, eighty-nine years old and he’s had a stroke that makes him wheelchair bound and makes communicating very difficult for him.  He’s still writing, though, having just published We’ll Always Have Paris, a collection of his short stories – and working on a new book as well, despite the stroke.

I can think of few people who have influenced me in my life as much as Ray Bradbury.  I’ve been reading his work since I was about fourteen years old, when The Martian Chronicles was assigned reading in school.  I’ve met him on three occasions, each time about fifteen years apart.  And each time, I came away with something new, something remarkable, that kept me going for the next fifteen years.  This most recent time was no exception.

We gave him a standing ovation as the attendant wheeled his chair up onto the stage, another attendant pouring him a glass of red wine, which I have come to know is something of a tradition when he comes to speak anywhere now – or if not, then I’m sure he wouldn’t mind my implying that it is.

He gave the same speech he gave the last time I saw him speak, fifteen years ago.   A lungful of air was only good for three or four words, and he was weary with the effort of speaking at all.  But he pressed on, sometimes quiet, sometimes passionate, and the audience broke out into laughter or applause at various points.  He closed his eyes, and tilted his head back and concentrated on his own words.  He was clearly reciting his speech by heart – or was it his heart that was reciting his speech for him?

As this icon of two centuries spoke, telling us of his early days as a writer and how each of his major works came about, he kept coming back to one unifying thread:  love.  It was the power of love itself that kept him going through the entire lecture, and you could see that as he spoke, the reason he was able to do it was that the love of his craft propelled every word from his lips.  As he spoke, he became stronger, not weaker, and the importance of every word rang true, both for him, and for us. He loves what he does, and he does what he loves, and this was itself the important message he wanted to bring to us.

“Do what you love, and love what you do.  Nothing else matters. Love, you see, is everything.”

“If you want to paint, or direct, or act, or write, do it. Don’t just think about it, DO IT. If you do what you love and you love what you do, you won’t fail. Gather your courage and jump off the cliff!  You can build your wings on the way down.”

We gave him another standing ovation as he left the stage.

It was a watershed moment for me.  I’d just been given permission to believe in myself without reservation.  I’d always wanted

to believe in myself that way, but you know how it is – you think to yourself, “I’m just me!  Who am I to believe that everything will come out all right just because I think so?”

But right before he went up to speak, I’d drawn a sketch of Ray in pencil on the back of a program.  I modestly showed it to him and told him I hoped it was okay that I’d done it.  He took the paper from me, and marked it “A+”, autographed it and handed it back.

I guess now I have the permission I needed.